Most years, I've had very generic Secret Santa presents such as candles, soaps and smelly stuff.

But a couple of years ago, I struck a creative gift-giver who was very aware of my aspirations. I was a bit stunned when I pulled out a ream of paper from my gift, but then I saw the label.... 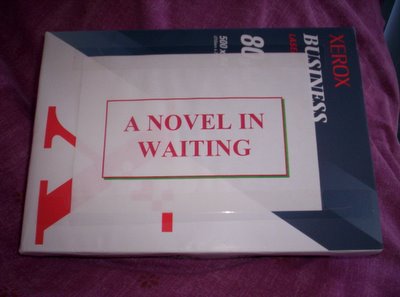 How fantastic is that!!!

I've saved it , because I'm going to print out my novel on it, when it's requested in full by an editor or an agent. So it may be the film festival novel which is at first draft stage, or it may be this current Nano work. But it's so nice that someone that I work with has that belief in me. (I still haven't found out who my secret santa was for that year).

And speaking of the current Nano work in progress...I'm zooming along. It's probably adding time to the process, having to write longhand and then type it in, but I can add more words and refine during the typing stage. And it also gives me a chance to reread to psyche me up for the next section.

I really believe I can write the whole 50,000 words this year.

As a fellow writer, I've gotta say that that's one very cool gift!!

I have stalled big time on my NaNoWriMo novel due to long work hours.

I sincerely hope that you can use that ream of paper as it is intended.

Good luck with your novel.