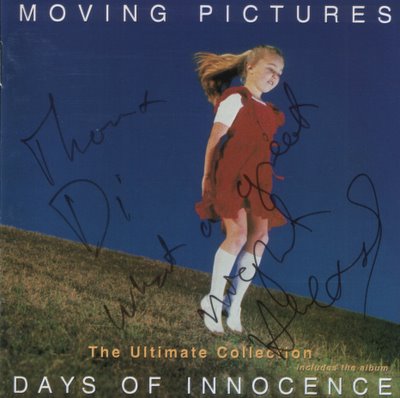 Signed by Alex Smith in August this year.


Thank god, it's Saturday! After two 12 hours days of work this week plus the usual 8 hour plus days, I'm thankful to have the weekend to concentrate on writing. The characters are talking to each other in my head, entertaining themselves when I'm not at the keyboard or with notebook in hand.

I have transcribed the last couple of days writing, will surrender the computer very soon, read the papers and go back to the long hand.

Perhaps I wasn't such a Moving Pictures obsessive in my youth after all? I don't seem to have much Moving Pictures stuff. Sure I had the two L.P's and some piccies but maybe my 'stuff' just didn't survive the last twenty years. I've got an poster (from Dolly mag) autographed by all the band members after a gig (will post pic later), I have most of the singles still, but I don't seem to have many articles. I can't remember having a scrapbook on Moving Pictures though I might have had one and it's now a black hole in my memory. I definitely remember having an Abba scrapbook which probably went to the tip when they were so uncool. And I also went through a rather obsessive John Lennon phase and had loads of John Lennon/Beatles stuff. Aside from that, my other musical obsession would be the Eurythmics, whom I have seen in concert four times.

As for the lack of Moving Pictures memorabillia - well, there's always Ebay to make amends. I won an 80's Oz music mag which I hope to receive shortly and I've just bid on an 80's Rolling Stones mag. Perhaps Smash Hits wasn't around that far back. More likely, I just didn't have the fundage to collect as much as I could.

Who was your teenage musical obsession????

The legendary Elvis Presley was my obsession in High School and I was called "Elvis".

Your blog is in touch with humanity even for me a Nigerian in Nigeria.

My aunt loved Elvis so I grew up listening to Elvis from a baby. He wasn't my obsession because by that time it was his Las Vegas years, but he still had a great voice.

I LOVED Moving Pictures. I miss them. I, too, ran into the problem of a lack of info about them online. Do you know how one might reach Alex Smith? Does he have an email address, website, or snail mail address that you know of? How about the band? Do they have a web page?
My obscession in the 80's was Prince, Moving Pics, Asia to name a few.