Do you ever google people from your past to find out what they're up to?

So today I googled an old boyfriend and found a site that very much sounded like him, especially with the computer programming background. Okay, so he's still around.

I googled another: a theatre producer who hated having his photo taken. In fact the only photo I managed to half-snap of him, he was covering the top half of his face with a newspaper, and you can only see his smile and his beard. So it did not surprise me at all, that google yielded no likely results.

Then I googled the name of a lady who was my boss 10 years ago. To see what position she's now in, which roost in the arts world she's now ruling. The first result that came up was an obituary from 7 weeks ago. It was definitely her. I recognised her children's names. But the link took me nowhere. No further information as to what had happened. I wasn't expecting that result. I'm feeling sad. For her, because she wasn't old. For her adult sons, for losing their mother. I didn't always get on with her, she was a pretty tough boss, but I admired her for her toughness. Something I've never been able to achieve.

As you can tell from this post, I'm still sucked into the net. I blame BlogExplosion. It's all so tempting to surf blogs to earn credits for their Christmas competition and to do battle in Battle of the Blogs. So, not many words have been added. Although I have been playing around with lexigrams which I will post later. And writing a report which is due tomorrow. 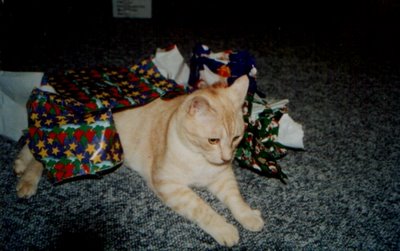 And Christmas has finally arrived in our house. After my cat's complaints that there was no tree on his blog Diary of a Mad Cat, the tree is now up, giving him a great ambush position. There are presents under it, and the Chrisco has arrived, so the cupboards are jampacked. I wonder how long it will take for the cat to unwrap the presents. A week, perhaps?
Posted by Diane at 3:50 PM

BlogExplosion is evil! It takes up so much of my time. Ok, I'm going to do some writing!

I know what you mean with googling th past. Isn't it great to find old friends that way? Trouble is that all the gals have married and have new last names :-(