Missed it by that much! 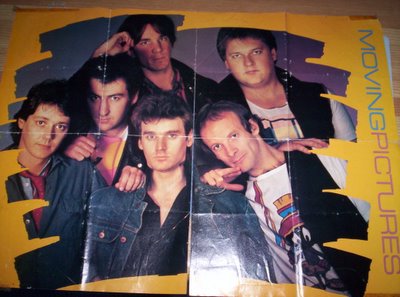 Moving Pictures poster from Dolly magazine (1983?). Signed by all of band (in pen, so you can't see it in this small pic) after a gig at Campbelltown RSL which I forced my father to take me to because I was only 16. Maybe you can see Alex's autograph scrawled across his neck in the close-up below. 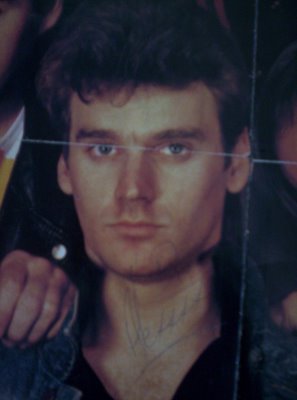 Where does the weekend go? It's 8.30 pm Sunday evening and I'm facing a 5 day working week with two 12 hour days in there. Am I a glutton for punishment or what? I'm afraid not. I just need the money at this point.

Every second week at work, our social club holds a Lotto game. $2 for 4 entries. Pick 4 numbers out of 15, and you've got to get all the numbers to win the dosh. On Friday, it was $500 and guaranteed to go off. They would keep drawing until they had a winner. So, because I knew someone had to win, I put in an extra 4 games, in addition to my regular entry.

Shame, it would have more than paid my excess on my insurance to get the replacement TV, DVD player etc that was taken out by lightning weeks ago. So instead, I'll keep working the overtime.

Oh well, instead of TV watching, I've been writing so it's all good. But I've been writing about the one night, the last night of the tour, for so long now, that surely this one night has gone for more than 12 hours. And the characters are showing no signs of even being tired. I suppose they're hyper after the gig. But guys, you will have to check out of the hotel in the morning. You will regret this!