This weekend I did a writing workshop with my writers' group. The workshop was led by Peter Matheson, a dramaturg and was about storytelling. There was a lot of emphasis on character building and planning, which is in total opposition to the way I usually work. I admit it - I'm a pantser - I fly through a first draft by the seat of pants, rarely planning any further ahead than the next scene or the next couple of scenes. I choose a situation or a concept i.e. Diary of the Future I started with the idea of being able to write the future in a diary and have it come true. With I'm with the Band, I started with wanting to capture the feeling of being 17 again through the reunion of a favourite band. Making the Cut started with an idea of a film festival in a small country town, the characters came after the situation. The character for me only comes after the writing starts.

I have tried plotting and planning it all out in the past. Kissing Toads was more or less planned out with a chapter outline but new chapters kept popping up and stuff I hadn't planned on kept happening throwing the immediate trajectory in a new direction. And that one took the longest for me to write - 4 long years. And why? Because I'd lost interest. For the most part, I knew what was going to happen. As a writer I want to be surprised by my characters as if I'm reading it.

So yesterday when I took a photo of a woman that I'd never seen before and tried to build a background based on her as a character, I was falling back on cliches. Because the character was not organic for me. Perhaps if she'd been in the middle of an action or a situation, my imagination may have been triggered more but I just had this face smiling at me with her too pink lipstick and overdone make-up.

Today I took Kat from I'm with the Band to the workshop. We did an interesting exercise as we interviewed each other's characters. Nothing really new came up for me during the interview, but the perception of Kat I gave to others was interesting - much more passive than I intended. And the word groupie kept coming up. Middle-aged groupie. It's pretty sad really. She doesn't intend to be a groupie. She considers herself to be a huge fan, not a groupie. And when Alex invites her to sing with the band for a song or two, then she's 'with the band' not a groupie. It's her friend Maddie who's the groupie - in fact, she's such a groupie that if there was a show created called Australian Groupie (instead of Idol) she'd probably take out the title. 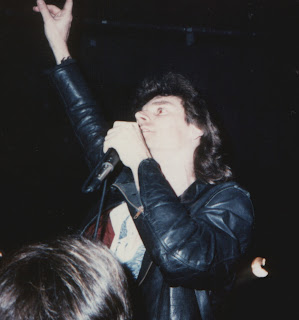 Certainly much to think about now. I'm still a fan of the shitty first draft (as Anne Lamont calls it) or the 'vomit' or binge writing as Peter referred to it over the last few days.
During the 'Twelve Days of I'm with the Band' I not only added to the manuscript but I also examined some of the previous writing and rewrote certain scenes, making them stronger. I'm over the 88k mark now and I need to stop the dialogue - the characters spend too much time talking, for some reason (probably a symptom of being a muso) they don't like sleeping much, but if it keeps up I'm just going to start jumping from scene to scene and only writing the absolutely pertinent stuff. I don't need to eavesdrop on everything they say and do. Do I?
Posted by Diane at 7:33 PM