I did the stereotypical writer thing today. A great start to the new year. I slept in late, woke up and thought about my characters and a pivotal scene. Decided I needed to rewrite it. So got up, got out the laptop and wrote in my pjs. Ah! The writer's life.

1986 new words today (so far). And yet I only have a total of 76,430 words because much of it was rewriting the pivotal scene. A scene of temptation and betrayal. I feel pretty good about the new scene because I think it captures how torn Kat is in the scene, much more than in the original writing. And I have echoed the dichotomy again in a later scene, but this time it shows that there is no dichotomy and that her mind and body are now in harmony. Still, I will probably ask some people for some feedback on these scenes, to see if I have indeed made the right choice in the rewriting.

After the original scene Kat was pretty laidback about it and forgiven Alex quickly for his misbehaviour! But after the rewriting she was extremely angry with him and also pissed off with her own behaviour. So that meant more rewriting in further scenes.

I'd been talking about how I wished I'd taken more photos of Moving Pictures when I was younger. But I didn't always take a camera with me and I didn't have an SLR back in those days, so I think I was stretching whatever camera I had to the limit anyway.


Here's an example of what happens when you use the wrong speed of film: 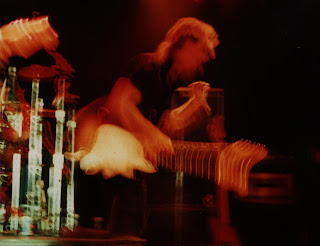 Writing in your PJ's, nothing like getting out of bed stumble for that first cup of coffee before sitting down to write. Before you know it, it's almost lunch time and here you are still in your PJ's writing away without a care in the world. (Well maybe not without a care in the world, because your characters have decided not to do as you want them to.) Hah a writers life.

Glad it is all coming together for you. Hey Diane.

Hey just checking in to see how your going... keep up the good work! :)