The word count and percentage are going up but the bar remains the same - I don't know enough html to change it.

Although I'm getting closer to my estimated total word count, I'm not sure that I'm getting closer to the end of the book. Hopefully, I'm not finding new scenes to add. Matt and Alex had been planning a glamour makeover and photoshoot for Kat, but now she's gone to the hairdresser herself and had her long hair cut and coloured, so I guess all she'll need now is a makeup artist. I've been flicking through Cleo's and Cosmos looking for an image of Kat's new hair and everyone has long hair again. When did this happen? When did short hair become unfashionable? Kylie still has short hair.

So on Day 18, I reclaimed my writing room. After decluttering it back in September, my laptop then died and we hauled out the old computer to connect back to the net. It had a monster monitor which took up all of my writing desk and I seriously debated buying a new flat screen for it to give me more room to work. A few weeks later the laptop was fixed, I went wireless and I stopped venturing into my writing room, and started using the laptop in the loungeroom in front of the TV (which was very unproductive). I'm pleased that we didn't buy a flat screen for the old computer, it completely carked it a couple of weeks ago, and now I have my writing room back. The computer has been banished (we'll retrieve the info from the backup hard-drive off it and the monitor which still works will be donated to a local which refurbishes computers) and I have space again. 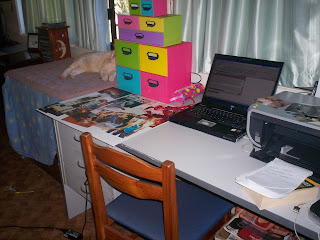 Yesterday, we were debating the spare room which is filled with stuff including a big desk, entertainment unit, TV, a full bookcase and is the dumping ground for the clean washing. We want to turn this into a guestroom/entertainment room so need a sofabed for it. But the desk was taking up a huge amount of space. The desk is now in my writing room and has enough surface area for my scanner/printer, laptop, collage files (the coloured drawers) and a collage workspace. 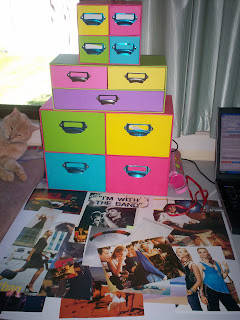 Note: I'm still in the stage of this collage of 'where does this picture go?' so not a single image is fixed to the cardboard.

I'm happy and Dorkus is happy that I'm spending time out here again with him. 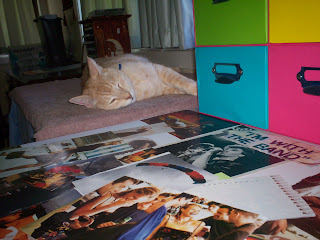 Dorkus now has his own myspace page and his goal is to round up more friends than Lucy Pig. Can you be his friend?