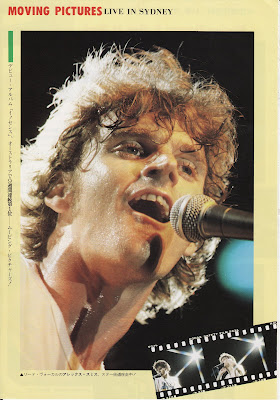 Okay, I admit it. I have a few addictions. Everyone has to have some vices don't they?


I have a mild addiction to Moving Pictures and collecting their memorabilia. So I have a search set up from Ebay to alert me of any items. The above picture came from a Japanese magazine, and I was lucky enough to do a deal with a guy from America who wanted the other pics that were on offer. Anyway, I ended up with some very nice photos of the Alex Smith and the band and a magazine article in Japanese - shame I threw my Japanese language course after a year but a new job meant a scheduling conflict and I could no longer attend the classes. Thinking back on it now, it would've meant changing my work hours one day a week by an hour - you think my boss could have accommodated that.

This week I also picked up a very nice Chris Wilson poster. I need to get these posters laminated at some point. They are no use to anyone wrapped up in poster tubes. They should be displayed.

And now I'm bidding on a few writing books. Can't seem to get enough of them and there is very little variety of writing books available in Coffs.

Yeah right.
At least, I am operating in reverse. I'm selling a few old mags (mainly movie mags) which are too good to cut up for collage. Those sales may pay for my recent purchases.

I have a major internet addiction. Myspace, Facebook, Blog Explosion, and it sucks up a lot of time. But on the other hand, I have met a lot of wonderful people on the internet, I've learned a lot about writing and I receive encouragement for my writing. So it's not an addiction that I'm about to give up. Just reign it in a bit!

I often spend time on Blog Explosion in the Battle of the Blogs and surfing other members' blogs. On the weekend the site was down and giving strange error messages. Now the site is backup, there are 12 active battles, and 24 more BE members with battle challenges waiting to be accepted. Which makes me wonder why they don't battle each other? I have never seen so many battles waiting to happen before. Guess we're all addicted to the challenge.

Speaking of battles, my cat and Lucy Pig are currently in a battle of their own on MySpace to see who can get the most friends. At the moment Lucy Pig is beating Dorkus with a 2:1 ratio so Dork is not impressed. You can befriend either the cat or the pig at the above links.

So as for writing, that can be both a battle and addiction. I've forgotten what I'm up to in the Twelve Days of my novel in progress I'm with the Band. As my last post was on Sunday for Day 18, I guess today must be Day 21 because I was posting one day behind. The word count is now over 84,000 words, the pictures for the collage are nestling between two pieces of cardboard so that Dorkus will not mess it up, but I'm still looking for some pictures. I also think I've slowed down in the writing because I don't want to let go. But at least it's still moving forward.

Now I need an early night. My insomnia is acting up again. Guess I have an addiction to being awake and the weekend (when I can be addicted to sleeping and sleeping in!) seems like years away.
Posted by Diane at 9:11 PM