My writing in the 50ks in 30 days challenge has continued steadily during the work week and I passed 20,000 words last night.

20K in a week. I'm pretty happy with that.
Although I'm drawing a lot of the story from my own life, things keep making their way into the story that didn't actually happen. The characters appear to be developing wills of their own, deviating slightly from the actual events, but I just shrug my shoulders and keep typing. While the story and action is flowing, I'm going to go with the flow.
For the entire manuscript, I now have 45,511 words and estimate I will be finished at around 75k.
No new writing today as yet for Hold the Anchovies (but the night is not yet over). I spent the day at a memoir writing workshop with the lovely Alice Pung. 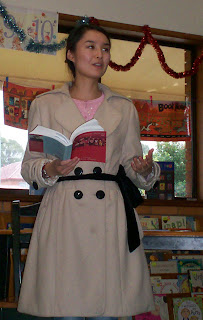 And at the workshop I wrote the following about my birth:

I was anxious to see the world. I was supposed to be an Aquarian but I had decided that twenty-two minutes into Sagittarius I would make my appearance. Freedom-loving, independent and above all spontaneous: no quack was going to tell my mother my birthdate.
Mum was already in hospital with a kidney infection. Lucky! Because I didn't give her much warning. It was probably the infection that stirred me into action.

In the middle of visiting time, my grandmother clutched my mother's hand. 'You're having your baby.' She turned to my father. 'Tell the doctor.'

The doctor dismissed her claim. What would my grandmother know after giving birth five times herself? But they quickly realised that she was right.
Half an hour later I was born. Mum said I looked like a skinned rabbit. Three months premmie.
Years later I told her I was trying to teach her a lesson about being early. She never learned that one.
Afterwards, my father caught the train back to my Nana's house and ran down the street announcing my birth to all the neighbours. 'It's a girl!' 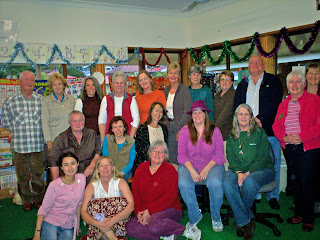 Alice commented that my voice is meta-fiction --- fiction that is self-aware. I guess it's like the Seinfeld episode where they start pitching the idea to NBN and turn their lives into a sitcom. Self-referential.
Anyway, it was a great workshop. Good company as usual and we did a number of various writing exercises but now I'm brain drained and wonder if I will get any more words out for my couple who keep rebelling against their author. 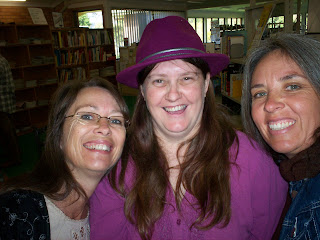 But it's cool if I don't. Tomorrow is a public holiday!
And you gotta love that.
Posted by Diane at 10:04 PM

20,000 words is a brilliant effort - good for you. I hope to do the same with my second and third book ideas as well.

My first one was non-fiction (Work/Life Balance for Dummies) and ended up being 100,000 words, written in a very tight three month timeframe with three months prior to get my planning and research done. I ended up doing 153,000 words which the editor forced me to cull!

You are doing well with your word count. I don't know what meta-fiction means but it sounds good. Love your hat!

Sussan, I had never heard of metafiction before but here's a link to the wikipedia article

As for the hat, I've decided to become a hat person and that's my first hat purchase for a long time. I'm sure I'll find some good ones in Melbourne.

Kath, good luck with your next books! Wow, 53k is a lot of words to cut.

Well done with your word count. I'm impressed you were able to write all those words and have a life. Is your middle name Wonder Woman.

OMG!!!! What a fantastic achievement. That's 40% of the challenge in ONE week. Amazing. Well done. I agree with Barb's Wonder Woman sentiment. *grin*

You are doing A-MAZ-ING-LY well and I'm impressed what you wrote at the workshop. Anything I write in public is always SHITE (whoops am I allowed to write that on a blog?)

I've been such a slack butt not dropping by until now and it's the end of the week. But you are doing great with the challenge. Love the hat. I made an early entry into the world. My Dad dropped my mum off at the hospital and went to park the car. If he had walked out and back in two minutes later he would have know he had another daughter. Instead he stopped for a ciga abd found out ten minutes later. I still hate waiting around.