My current work in progress is Hold the Anchovies, which is based on My Brilliant Pizza Career.
I won't mention which company I worked for as I don't want to suggest that their stores are a hotbed of sex, drugs and rock 'n' roll but that's where I got my education.

And it's interesting reliving it. At least on the page

Below is a 'pizza' made by my mother for the owner of the store. Look closely, the whole thing is made of icing. It was a farewell delivery. 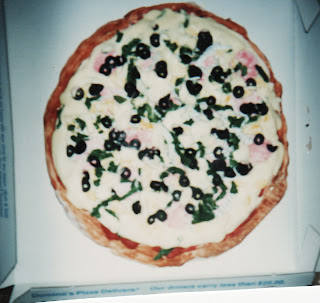 I could not have done the job without my faitfhul companion Helga, my 1966 VW Beetle. She was famous amongst my pizza customers, and had a certain infamy amongst my fellow staff for breaking down. I loved Helga- she was my independence and my freedom and I was sad to say goodbye to her when she finally packed it in. (this pic and song is from my 1986 diary) 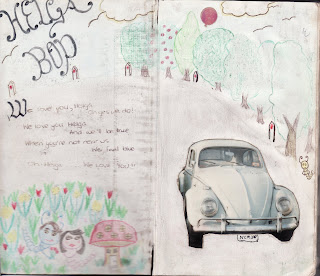 Thought I would include a photo of me from that circa. This is taken at a post work party, actually the farewell party that the cake pizza was made for. 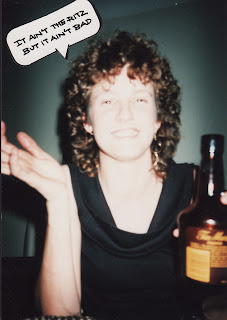 More pictures of Helga - this time with my sister and cousins posing as car models. I don't think they got the car ad job. 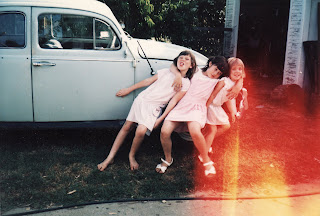 I worked for the pizza place for a couple of years, but my brilliant pizza career ended not so brilliantly. My second delivery to the same customers late at night -- but I never made it back to the store. A drunk idiot coming through the red light made sure of that.

Helga was off the road at the time. Almost as if she knew something. I was driving mum's car - the yellow one. Lucky I'm a survivor. 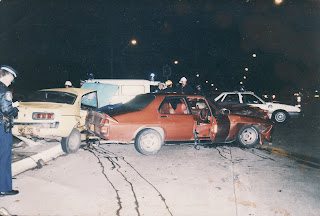 You were a very lucky girl to survive that accident.
Great going on the word count.

Great going on the word count Diane. Nice to have some fond memories of Helgar and the pizza days - except for the way it ended but you are very lucky indeed - that crash looks horrific.

Sounds like some stories from that Pizza place need to be told.

This story sounds so interesting... I'm sure it'll be published and I can't wait to read it. Glad Helga was off duty that night!