What do you mean I won? 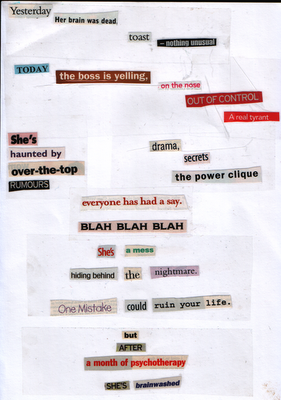 Yesterday
Her brain was dead
Toast
- nothing unusual.
Today, the boss is yelling,
on the nose
out of control
A real tyrant
She's
haunted by
over-the-top
rumours
drama
secrets
the power clique
Everyone has had a say.
BLAH BLAH BLAH
She's a mess
hiding behind the nightmare
One mistake could ruin your life
but
after
a month of psychotherapy
she's brainwashed.
Exciting news! The writer's group ran a poetry competition and the winners were announced on Saturday at our AGM. I'm stunned! I won first prize with the poem above - Yesterday. And I won 2nd prize with Sex and the Single Girl. (see below) So I know I'm write on track. I will bring you a photo of the trophy shortly - it's a beautiful silver quill atop a wooden stand, donated by our life member, Anne.
It was strange because I had the digital camera out, ready to take a picture of the winner, and then my name was announced. I think they wished they'd had a camera pointing at me, because the look of my face was 'priceless.'
It inspired me because on Sunday not only did I design the DVD cover for my partner's documentary project, but I assembled another collage poem. My aim is now to have 50 collage poems collated and printed beautifully, ready for the Byron Bay Writers' Festival, because you just never know who you are going to run into.
Posted by Diane at 10:11 PM

Maybe I missed it but no postings of the poems?

Visiting from BOTB. Love the site. I'll bookmark you and be back.

Just voted for you on BOTB and congratulations on your winning poem. Have been thinking of having a poetry contest on my site as well.

Major congratulations! Don't you just love collage poems? I could cut and paste all day. Good luck at Byron Bay when it comes up - that's a problem with living on the West Coast (too far to get to anything!). Well done - have fun.

Congratulations - look forward to the day I can say I knew her when...