No new words today. Took a break and treated myself to a new hair colour and cut. Feeling good, and ready to tackle the family wedding on Saturday in Sydney.

Friday will be around eight hours in the car - plenty of thinking time. Musing time for the muse. With the return journey on Monday.

One thing I have noticed in writing this novel - this is the first time that I have written much of the work with headphones on, and the music turned up so loud I think I'm at a concert. It has helped to get into the mood of a lot of the scenes.

What have I been playing? Moving Pictures (of course!), Chris Wilson (what a voice!) , Alanis Morissette and Deborah Conway. Actually, Deborah Conway's last album gave me the title of this blog. The first song is called Stay on Track (stay on track, don't look back) and I thought Write on Track would be an appropriate name to focus on writing . I purchased the Deb Conway album at the Byron Bay Writers Festival in August - Deborah was there for the launch of a book called Songwriters Speak, and had done a gig the night before at The Great Northern which was fabulous. Don't worry - I also bought books at the Festival! 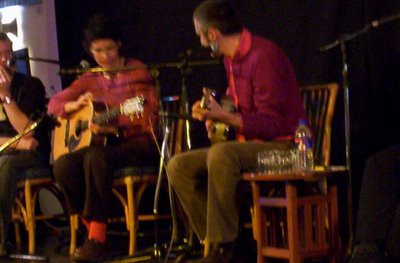 I went to Byron Bay Writers Festival in search of my writing mojo, as it had taken a holiday or something. I came back totally inspired, and a day later, saw the Moving Pictures gig (which inspired the Nano work) and now I have another 50k words and a novel to finish! 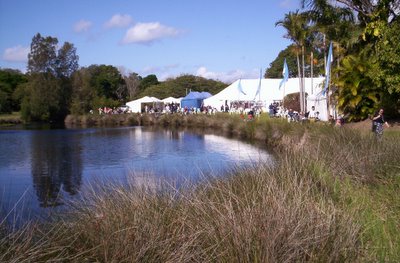 Creativity inspires creativity! I've got to get out more - music, film, theatre, art. Sometimes I miss living in Sydney for that reason - the huge selection of culture. But on the other hand, when I lived in the middle of the rat race, I was so busy soaking up the culture, I was rarely home and I hardly ever wrote. Now, in regional NSW, the selection of culture is limited, so I'm writing. So, it's a mixed blessing.

I would dearly love to catch some culture this weekend however with only two days in the city devoted to family, it's not going to happen. And two days in Sydney will probably be enough to convince me (just by the traffic) that I don't want to live there again.

Be back after the manic weekend.

I almost always write with headphones on. Sometimes I find myself bobbing back an forth with the music as I write. Glad no one can see!

I think that if my novel ever gets published, I will post a list of bands whose music inspired me during the course of the book, lol!

I write with music too!!! And several photos of Patrick Dempsey ... because that really is the BEST inspiration!

Congrats on winning NANO -- and I really like the new look!!!

Great blog - good to meet a fellow Australian. I am from Australia but have been living in Seattle, USA for 5 years. Talk about a blast from the past - I am referring to Chris Wilson who happens to be my old English teacher from long, long ago...

Now you've got me intrigued. I reckon Chris Wilson would've been an amazing English teacher. So what was he like?

I first saw him performing at the Metro Theatre in Sydney and he was support for an Aboriginal band, Tiddas. He can't keep still on stage - not sure whether it's nerves or just energy, but I couldn't keep my eyes off him. I was absolutely mesmerised. Anyway that night I absolutely fell in love and lust. Have every CD he has put out, and I'm trying to track down recordings not on CD as he has one of the best voices I reckon this country has. And he is totally underrated here. Probably a good thing I don't live in Melbourne, because I know I'd be spending a lot of time at his gigs.

If you want to do a catch-up, check out www.sanity.com.au - he has just released a DVD Chris Wilson, Live at the Basement.