I have a confession to make.

I've been reading more than I have been writing.

In between the Film festival work, it has often been easier to stick my head in a book and read someone else's writing than to write myself. Plus, they are all library books (well, mostly) so I have a time limit. Don't you hate when all your library book reservations come in at once?

Last week, I read Couch World by Cathy Yardley, Red Dress Ink. Very enjoyable. I was also reading while I was burning CD's for our govt contract, so it was multi-tasking.

This week, I have read Sophie Kinsella's The Undomestic Goddess - finished today with a semi-migraine because I really could not cope at looking at the computer screen.

Also have Twins of Tribeca from the library, but I've read about a chapter, and it hadn't sucked me in, so I've moved on to something else.

Plus I have Confessions of an Ugly Stepsister to read from a bookcrossing bookray, so there's also a time limit on that one. 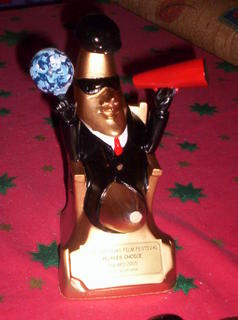 Anyway, today was a drag and I felt like crap with the migraine that never took hold but has only really just left me.

But this afternoon, Karen delivered the Cool Bananas trophy and really lifted my mood.
Cecil b. d'nana is so handsome - a beautiful addition to any filmmaker's mantlepiece.
Posted by Diane at 9:20 PM

Now stop reading and get writing!!!