It's funny, I think I 'm starting to measure my life in Blog-off Posts. Yes, another week has passed and it's time for the weekly blog-off. This week the one word topic is 'golden'. Courtney is raising money for the Breast Cancer walk and we're blogging off in support.

All things golden have been a pursuit of man since they struck their first gold vein. 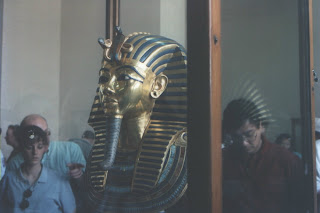 The pharoahs of Egypt were incredibly materialistic. Not only did they believe in surrounding themselves with gold in their lifetime, they did not subscribe to the saying 'you can't take it with you.' They were certainly going to do their best, even if they couldn't prevent the tomb robbers from stripping the valuables of their afterlife. 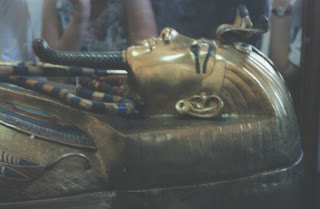 I wonder if that's where it all started. This obsession with gold, the idea that this element is more precious than anything else on this earth. It's a catalyst for greed, and has caused fights, battles and wars. Government and churches hoard it, and people lust after it. 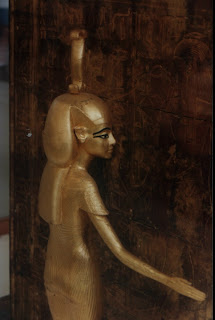 The legend of the Midas Touch is created around the lust for gold. Pity for Midas that everything he touched turned to gold. Now it might be grand to have a gold toilet seat but when you can't eat because your food is rock solid then you have problems.
For a while, I felt that I had the opposite of the Midas touch where everything I touched turned to crap. It was extremely frustrating and as much as I strived the end result was not what I wanted. But life is turning around. While the astrologers may attribute it to Jupiter moving through my sun sign, I attribute it to something else. I've stopped trying to please everyone else. Now I aim to satisfy my own creative urge and with that focus, I am succeeding.

I haven't eschewed everything golden in my life. There's still one golden boy who is more precious to me than any number of carats. And here is Dorkus.... 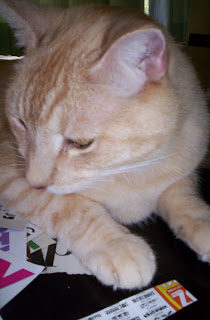 "For a while, I felt that I had the opposite of the Midas touch where everything I touched turned to crap."

LOL!! Love it! And I'm so glad you are finally learning to trust yourself and stop pleasing others. Why does it take us so long to figure this out??

Very well written post, Diane. It's so true, a love for gold goes as far back as written words... and even further, I suspect (without researching). Too bad they didn't assign something else that expensive quality- you know- something I have in large quantity. I don't know, maybe paper?

Good post. And it may have taught me something new. Perhaps I have lived my life under a rock but is this where the slogan for the Midas commercials came from? You know......trust the Midas touch.

That was great. I like that you're the only one who really went with actual gold as a topic. That's kind of funny. I enjoyed reading your historical angle on things. Good job!

G - it does take us a while to trust ourselves, listen to our intuition. Now if only I can get my partner to listen to my intuition.

Courtney - I have loads of paper/books too. We'd be set for life!

Evey - I guess that's where the slogan came from although Midas found it to be a curse because everything he touched turned to gold including the food, and in some versions, the river he jumped in to get rid of the affliction.

Carly - it gave me a chance to post my pics from the Cairo museum. I saw the goldent treasures in Australia when they were on tour, and then again in Egypt. I didnt bother going into his tomb though as there was an extra charge and all that's in there is the mummy

C- thank you and Dorkus thinks so too!