A weekend of solitude

I could be watching Tropfest tonight. I won tickets to the 'Sony Patch of Grass' after entering their short story competition. But as Tropfest screens on a Sunday evening, and I have to be back at work at 8am tomorrow morning, I'm still in Coffs Harbour and Tropfest is still at the domain.

But the tickets won't be going to waste. Robbie happened to be going to Sydney this weekend so he will be there with his little sister.

Instead, I have scored myself a weekend of solitude. This is absolutely delightful as I've been feeling lately that there is way much noise in my life, and people talking is the major percentage of noise. So I am enjoying the sounds of nature, the sounds of music and some talking when I switch on a movie. But the talking is contextual and its not a cacophony of noise as fifty people try to talk at once. Welcome to my dayjob!

Yesterday, I read a friend's manuscript which included a lot of short stories and now I'm feeling a bit overwhelmed about finishing my short story because she's so good. But I will. I shall. The deadline is next Saturday.

I also watched Women on the Verge of a Nervous Breakdown again. I haven't seen the film in years, but I still love it. Strong women, ensuing chaos. I still think it's one of Almodovar's best. 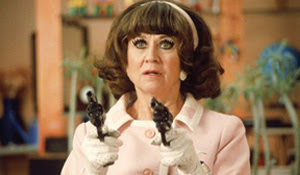 Labels: solitude, Tropfest, Women on the Verge of a Nervous Breakdown

Tag, you're it!
I am SOOO Sorry. I got tagged for the first time and now I'm tagging you. Pop over to my blog to see what it's all about.
Hugs
Sandie