Word count is now at 86, 461 words and I've got this old fart 70's rocker Billy Badd who has turned up at a gig with his two blonde bimbo daughters (referred to by Kat as the Bimbettes) and is desperately trying to pull focus. I think he wants the story to be about him. But tough luck Billy Badd - we're moving on and leaving you behind, and I'm hoping that he doesn't show up at another gig.

Bought a DVD recorder yesterday. Haven't been able to record stuff for quite a while but now it means that I can record all the late night TV stuff such as the Countdown episodes which are screening on rage at the moment. Watching it now - Neil from The Young Ones hosted the first one I recorded. I loved the character of Neil from that show. The rest of the characters seemed to need each other to bounce off for real comedy to work (I found Rik Mayall's stand-up routine as the character Rik really dull, but when he was just himself doing stand-up, he was great) but Neil was one of those characters that seemed to be able to create comedy just by himself. I've got his Heavy Concept album but it's extremely scratched so I'm not sure how much I could salvage off it even if I had a record player.

In the second episode, as well as Tim and Debbie (remember them from Australia you're standing in it - when will they release that on DVD?) , they played Moving Pictures performing 'Where they Belong'. At last, something other than 'What about Me?' and it focused on Alex Smith singing. So now I'm happy. I really want to get hold of the televised concert Moving Pictures did in the early 80's at the Hordern Pavillion. I did have it taped way back then, but of course many moves later and even before the moving, I think it was taped over. If anyone can help me out with the footage, let me know. 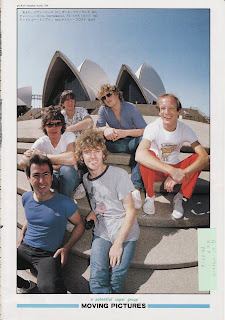 I'm independent again - I picked my car up after the accelerator cable was fixed, after 4 weeks of car sharing. Then on the way home, one of the tail-light covers fell off, smashed and bounced off into the bush. A few minutes later, I drove around a corner and a kangaroo was standing there. I hit the brakes and the kangaroo took off so I was lucky because my car and the roo could do a lot of damage to each other. So yesterday morning, we went out on a mission to get a new tail-light housing - at the second wreckers we found the part, and that problem is now solved. Then we bought the DVD recorder and I bought the Vicar of Dibley last 2 episodes - it is so funny.

It took about an hour to set up the recorder because Robbie wasn't listening to my instructions and its quite confusing when you want to plug in both Austar and a set top box. Finally, after much arguing and wrenching the TV out of the entertainment unit and untangling chords, it was all set up and I was able to test it out. So recording is great, but for some reason it doesn't like my Vicar of Dibley DVD and won't play it. It's not the disc - it plays on the old DVD player - but maybe the recorder doesn't like English comedy. It has played every other disc I've put in, so I've got no idea what's going on. Robbie thinks it won't play dual layer DVD's but I think it only won't record on dual layer. Anyway, I can always watch the Vicar on the laptop if I need to.