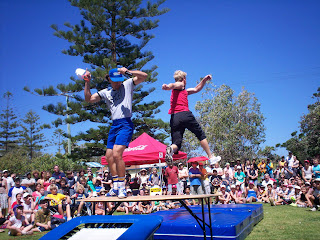 Something shifted today and instead of spending the public holiday glued to the keyboard, I went out to the Buskers Festival at Woolgoolga and soaked up the sun. Now I am not a sun baby, I've always preferred to get a moon tan rather than a sun tan, but a couple of hours of vitamin D should have done me good. Well, I had a great time watching the acts even if my legs had gone to sleep and it was great to be amongst an enthusiastic crowd watching grown men humiliate themselves in public. 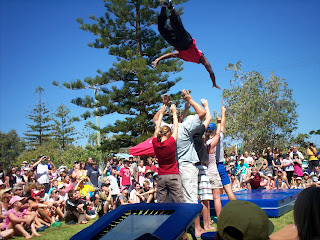 I paid for my time in the sun this afternoon with the beginning of a migraine, but once I'd taken a couple of tablets and eaten a decent meal with vegies, I was alright again. 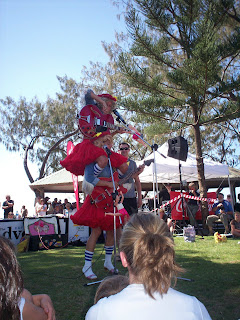 I didn't quite achieve all the writing goals I wanted to. I allowed myself some time off this weekend which was enjoyable. The time off included the Festival, and watching 8 episodes of the second series of Dead Like Me. I love that show and I cannot understand why it wasn't shown on free to air TV in Australia. Actually, I do understand - the TV stations are run by morons who think reality TV is the answer to everything and show quality drama such as The Sopranos and Six Feet Under at midnight. So now, I'll print out a coy of my work in progress and take it to work to edit during breaks. 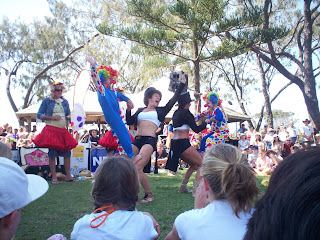 When I went to Byron Bay Writers Festival, I saw Richard Flanagan speaking about Research for Fiction Writers. He was very funny, so I borrowed his latest book The Unknown Terrorist from the library.
Wow! This is an amazing but scary story when a pole dancer is implicated by a chain of events and the whole nation believes she is a terrorist. In today's climate of fear-mongering and security alerts, the premise of the novel was all too realistic. Richard Flanagan twists the plot with some incredible metaphors that capture contemporary Sydney.
Although this copy will be returned to the library tomorrow, I will be purchasing a 'keeper' copy soon. The book is that powerful.
Posted by Diane at 9:09 PM