So I got through quite a bit of the decluttering/spring cleaning the office last Sunday and I've posted some before and after pictures. 11 boxes is down to 8 boxes and yesterday I also bought a paper shredder to get rid of century old bank statements and personal docs that I don't need. 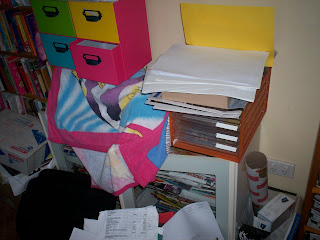 Before: collage stuff, magazines, boxes and who knows what else. 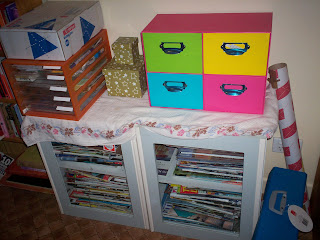 After: magazines I can access, my collage box full of cutouts, scrapbooking bits and pieces in the drawer organiser. Much better. 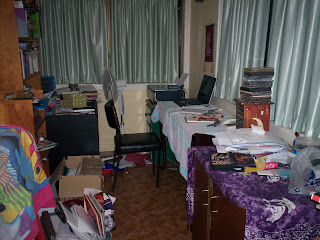 Before: Ugh! What can I say. 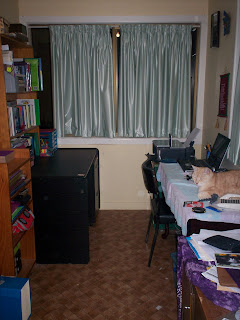 After: I do have a floor, and Dorkus likes having somewhere clear to sit.


Everything was going to plan. I'd written a 'to-do' list and a lot of things were crossed off. Remaining was rewrite my synopsis (didn't happen) and watch some DVD's from Quickflix.
I started Monday with everything planned out. Take my car which was playing up to my father for repairs and do his accounts.
The universe had other ideas. My car completely carked it half an hour into the 2 hour journey. The radiator shat itself, luckily in a place where I could pull over safely. My partner was about five minutes behind me because he'd stopped for petrol, so I waved him down when I spotted him. After waiting half and hour and filling the radiator again and watching it all drain out, we realised the car was going nowhere. Suprisingly I didn't stress out and get upset. It was one of those things that happen when you drive an old car and at least I wasn't stranded.

That afternoon the universe rewarded me for my calmness, and my unconscious decision not to go against the flow. I bought a new car after Dad phoned his car dealer friends. This car was running a bit rough, so he said have a look at it, you can have it for $500. We brought it back to my father's workshop, Dad fiddled about in the engine, doing up bolts here and there, adjusting this and that, cleaning spark plugs, put it up on the hoist and checked the front end. And now she's going like a dream. And there are several firsts with this car for me: it's my first station wagon, and it's my first automatic. And I'm very happy. The breakdown was meant to be for without it we never would have found this new car!

So this weekend I've been decluttering my computer and it took a lot more than 15 minutes. When it started going at snail's pace I suspected that the load of my Chickollage graphics and Jen's photo collages, plus my snap happy digital pics were weighing the hard drive down. I only had 2 GB left on it, and the computer was extremely unhappy. So I got an external hard drive and started shifting stuff on it. After moving all my photos, and Chickollage stuff, I'd still only reclaimed 2 more GB. So then I moved into my partner's side of the computer and discovered a folder which had 16 GB all by itself. All his video stuff which had hidden itself into this innocuous looking folder - the My Videos folder was empty. So I moved that as well. Then went to a defrag. The computer told me it didn't need it. It was happy again and humming along, and now I am too.
Posted by Diane at 2:34 PM

Looks great! The before looks like areas of my home. Wanna come over and declutterize it? :)

I am jealous of those colorful little drawers. I want some for my own.

LOL we bought a shredder in the same week ! Great minds ! I too am busy decluttering. Your results are looking great so far. ciao Karina xx