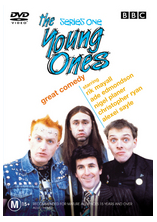 One of my favourite episodes of The Young Ones is Cash, when Rik, Mike and Vyvyan make hippie Neil get a job to support the household, so he becomes a policeman complete with baton and walkie talkie. He is called to bust a party at his friends' house and the scene where he knocks on the door, calling out 'Open up! It's the pi-igs!' and then half-heartedly raids the place, while warning his friends to flush their stash still makes me giggle now.

I had a run in with the police when I was nineteen. I jumped into the neighbour's pool at nine o'clock on a sultry summer evening and the sticky beaks across the road called the cops. I had permission to used the pool while my neighbours were away. But I guess that permission did not extend to my numerous friends at night. So the police turned up and asked us to vacate the pool but my then-boyfriend (who was much older) gave them a bit of lip, so they asked him for i.d and gave him the third degree.

It's funy how portrayals of police on television can influence your expectations. One evening I was home alone when I saw the police walking up my driveway. My partner was away interstate, so I immeicatly thought the worst -- that the police were coming to inform me that he'd had an accident. But no -- they were looking for the guy who lived next door, because he'd been up to no good. I was more relieved to know that my partner was okay than to worry about living next door to a potential fugitive.

One night I was delivering pizzas, and was pulled over for a breath test.
'Have you had a drink today?' asked the young constable.
'I'm working,' I replied. 'I don't drink while I'm working. What about you?'
(hah, I was a bit cheeky in my youth)
'No, I don't,' he said, and promptly breathalysed himself to prove it.
'Now it's your turn,' he said, after he replaced the pipe.
Lucky I was telling the truth!

This is Round 2 of the Blog-off organised by Courtney of Five Second Dance Party. Last week, we sadly saw Super Duper Fantastic and Motivated Motion eliminated. If you would like to make a donation to the cause, click on the link.

Labels: blogoff, police, The Young Ones

"What about you?" lol, you are cheeky! love it.

I also got caught sneaking in a pool at night when I was younger. Our complex had a pool but it was closed after sun down, yet my mom and I decided to hop the fence and go for a dip around midnight and we got busted. The cop just told us to leave, no hassle, but being younger it felt like such a scandal to me.

I'm too scared of the police to get lippy! Fortunately, I don't get pulled over often. :)

Sometimes police asked the stupidest questions that is hard NOT to be lippy. At least thats how I see it.What kind of idiot would honestly be out drinking in between pizza deliveries. lol

I can't believe he took a breathalyser himself! Yeah, I guess he's trying to force you to do it, but come on! He's a cop, why bother with the niceties?

I've always wanted to check out The Young Ones. Thanks for reminding me!

The Young Ones, eh? I remember Cheech and Chong...and then they had a friend Dave. The two would be stoned inside and Dave would knock on the door...

Wait a sec. Actually it's not very funny unless you're high on weed and/or back in the 70's. Never mind. ;)

OMG! I love the Young Ones. So many good lines and the humor is amazing!

I love the template! LOL

I miss watching The Young Ones. I wonder if I can find them on the web? I especially loved seeing bands like The Damned suddenly appear in the kitchen in the middle of Neil making lintel soup.

You were a bit cheeky in your youth - I love it!

I just Wikipedia'd The Young Ones. Thank you for expanding my knowledge of pop culture. Some say I'm lacking in that regard.

And, be as cheeky as you want. I love it!

Thanks for the comments everyone. Mmm, I think I might watch some Young Ones this afternoon after the holiday 'To Do' list is tackled.