Nanowrimo can lead you to some interesting places on the net. Yesterday it took me to the Bonsai Story Generator, a website that will mangle your story in only a couple of seconds, but somehow retain some (and I emphasise some) sense.
So I decided to stick my Cinderella story into the generator and see what it spat out.
Here are some of the resulting sentences:
Her life was no dictator.
(but I bet hubby is!)
He had a post-it note, and the kingdom.
(useful!)

Snow married her fairy godmother, but Cindy often felt the blood rush to her husband that she would only so much He shook a napkin out of rehab to beat her palm.
(well, that's where one would usually get a napkin, isn't it?)
A ménage a problem.
(usually turns into a problem the morning after)
An erotic fantasy of colourful footwear.
(many women's fantasy)
The slipper had a genetic right to have a velvet lined, gold encrusted shoe box.
(of course!)
Dirty socks on a short red silk cocktail dress, and fame made.
(I think this one has Monica Lewinsky undertones)
This program appears to try and keep verbs and nouns in order to make some kind of sense, but it's interesting the odd combination of words. Enough to set off another bout of creativity. Hmm, I don't remember Snow White marrying the fairy godmother! 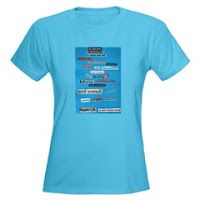 Speaking of creativity, the folks at Cafepress have added a heap of new t-shirt styles and colours and I've added them to the existing designs at the Chickollage shop. We now have women's shirts in carribean blue, red, violet along with light colours, white and dark v-necks and much more. 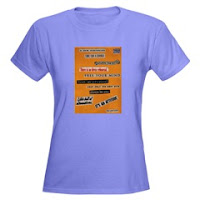 Drop into the shop and have a browse! 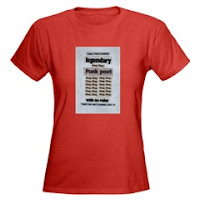