Following on from last week's post where writing a short story is like having a fling, while a novel is like a marriage, it seems that I can't even decide who I want to have a fling with. The idea that had been flitting around my head like a manic moth bashing it's wings against the light globe is still there, but I'd also opened my computer file labelled 'ideas' and found 1. a love triangle between a man, a woman and a cat and 2) a file labelled 'Notes for a screenplay' about working in a call centre.

So I have been flirting with all three ideas during the week, committing at least to a date with the cat triangle and writing some more, and then a date with the call centre story- The film idea would have been very expensive as live action and I alway thought it would work as an animation - but as I don't draw.....it's been on the backburner. But of course elements that could be very expensive in a film, don't cost anything in a short story because it's just narrative, description, action and dialogue. No actors demanding huge salaries needed. And no special effects. It's all in the words.
So, yes I was being fickle, unable to decide which idea I wanted to commit to, and playing around a bit with at least two of them, as I got to know them better! A convesation there, a look here, trying to start a fling in the wrong place....I still wasn't sure what to do. False starts, deleting, backspacing. In my imagination, I even believed that maybe just maybe I could write all three short stories in three weeks. It's still possible ...there are now two weeks left to go before the competition deadline. 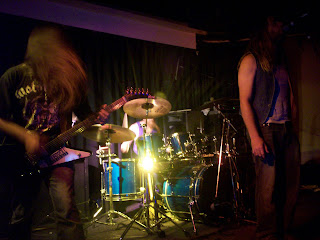 I had a false start on the call centre story. I wrote quite a bit of it, but it seemed to start too late in the story and didn't show enough of the evolution of the call centre worker from human to machine. It has been inspired by my many customer's who ask me if I'm a real person. 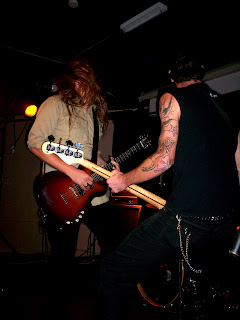 Then Saturday night, Robbie and I went to a music event. He was filming and I was taking some photos. Well, it was heavy metal and I'm not a fan of that type of music. Yes, I saw Black Sabbath when I was 13 but that did not light a pathway for my future music taste. 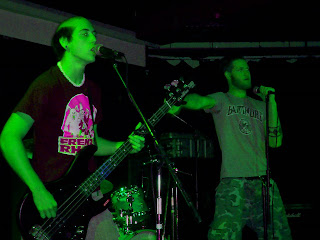 The night was interesting but long and so very very loud. Five different heavy metal bands performed (as pictured). I took many photos using both my film SLR camera and my digital and got some interesting shots, but really could not get into the music. I think the sound quality had a lot to do with this: I can't really see the point of having a vocalist if the instruments are going to be revved up to the max, to drown out any possiblity of hearing the vocals.

I'm not going to attempt any kind of review, because I'm not the band's audient. I don't listen to this kind of music as a rule. And I never really got the head-banging stuff. 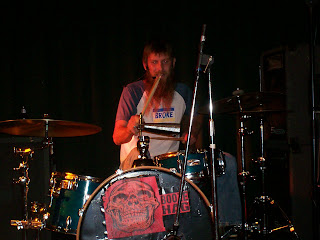 Between bands, I recommenced writing the call centre story. The next band would come on and I'd get up and take some photos and return to my chair to find it missing. (Guys from the first band -Monkey Butt Wrench - kept nicking it when I vacated it). And then I'd keep writing during the next break. I wrote the whole first draft of the story. There's some more to add as I need to ensure I cover everything in Maislow's Hierarchy of Needs, but I'm pretty happy with it. 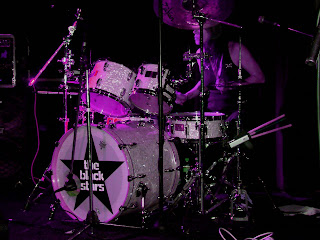 And I've discovered that I can write anytime I wish. Mind you, if it had've been at a blues gig, then I quite possibly would not have had the same outcome. Or I would've been writing something completely different.