The whole purpose of Nanowrimo is to move ahead with the words, switch off the inner critic and just plough along towards that 50,000 word goal.

Now that I'm trying to complete 'I'm with the Band', I'm not only trying to add words but I'm trying to refine and delete the unnecessary stuff. So in Nano terms today, I would be going backwards by losing words, but for Day 1 of my 12 days, I feel as if I have made some real progress.

- the zokutu extended word counter could not cope with that, assuming that I had made a mistake and gave me this comment:

NB: You input a total word count below what you've previously written, so we've used that value as the amount you've written since you restarted writing.

so I won't try to confuse the meter by putting in the previous word count:


I've moved 3080 words out of this manuscript and into a new file called 'Backstory' because it is backstory. Some of it can go back in at some point but not as the huge chunks of info that are in this file. And I've written (or rearranged) 1491 new words.

The important stuff is still there. The mystery deposit into the bank account, the intro to the band, Kat's Things to Do before I die list (and a bit of thought process for each item on the list), catching up with her former best friend Maddie.

Instead of the first gig of the band happening on page 26, it now takes place on page 20 so we get into the action a lot quicker. I'm still concerned that I don't start with a significant event but Stu is still being cowardly and just leaving a note when he walks out on the marriage.

The original story started with this:

'It was never meant to end like this. All the divorces I'd heard of...all the relationship breakdowns...all had been brought to an abrupt conclusion by the final straw, an argument, a disagreement that had been running like an undercurrent throughout the relationship, occasionally bobbing up, creating a commotion, before submerging again.

But this was different. There were no arguments. No major event. It just fizzled out and he was gone. A note left. That told me nothing. No forwarding address. No contact details. After twelve years together.'

Now it starts with:

'If only I’d married Alex, everything would have been different. But he was just a poster on my wall. The voice booming from my record player. My idol. My rock god. 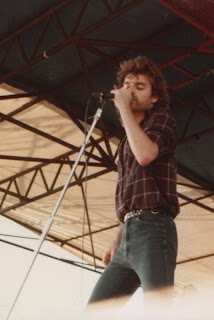 Now I'm happily calling it a day, with a net loss of words but a clearer direction for the beginning of the story. I'm working tomorrow and I've been sneezing most of the afternoon so I better get a decent night's sleep. But I can't help wondering if there are any writers out there who never have to change the beginning of their story.

Labels: I'm with the Band, writing

I love the new beginning! I can tell... this story is gonna ROCK!