Wow, what a huge weekend for thinking creatively.

On Friday night, eight of the NVWG members met to discuss and brainstorm our group novel. So far, nine chapters have been written over a period of two years. I have never worked in a collaboration on a novel before (although I have on performance pieces) so it is an interesting experience. And an interesting night - we ate and drank, and talked and laughed, and argued, and justified, and excused.

The problem at this point, is that the novel is too plot-driven without enough emphasis on character - each writer has added something dramatic to keep the drama going forward without enough attention to the present time of the novel, and its starting to resemble a soap opera. It will be interesting to see where it goes from here, and how long it takes to finish the story. I think we're signing up for the long haul.

Next morning, we held a workshop on how to conduct a workshop. I learned a lot of skills which I hope to put to good use some time.

And then we had the usual lunch at the pub, followed by the monthly meeting. We constructed some stories, with each word starting with a letter in alphabetical order. How hard is it when you get to XYZ? Maybe the trick is to start from the end of the alphabet, get those three tricky ones out of the way, and work your way back to it.

Doesn't make much sense but it was fun. So, what do you come up with? 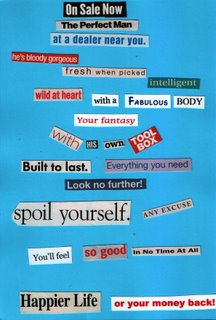 This is one of my favourite collage poems so far - because we all know that there's no such thing, especially down at the local shop. This image is now available on T-shirts and stickers at my Chickollage store at cafepress. Can't wait to wear the T-shirt at the Byron Bay Writers Festival!!
Posted by Diane at 2:11 PM

Hey this is awesome! I wanna make one of those hehehe...