I haven't caught up with the word count yet, although its starting to flow.

I've been ill. Felt fine on Monday at work, Monday night was fine -cooked dinner, and then while cleaning up, I felt faint. Went to the doctor yesterday, and I've got hypertension. Not really a surprise. I've got my dad in hospital, my television fried, car problems...the list just goes on and on and on.

Yesterday I could barely front up to the computer screen. This morning I've done some long hand, and then typed up, so that I have an up to date total as of lunchtime.

Starting to feel like it might have a momentum, as I finally have Kat's best schoolfriend, Maddie (who she hasn't seen in six years) turn up in the picture - it's now become more than inner monologue. I was beginning to despair that I was channelling a Virginia Woolf stream of consciousness effect.

I quite like the following though: Kat calls it 'The Big Bloody Banal Tour"

When we could’ve been visting the Acropolis, we were walking around a Big Pineapple. 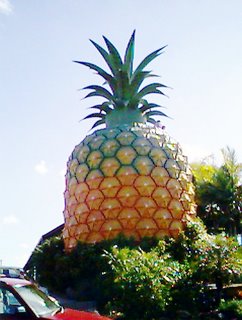 When we could’ve been sipping banana daiquiris on a cruise ship, we were examining the innards of the Big Banana in Coffs Harbour, followed by looking through the eyeballs of the Big Prawn in Ballina. 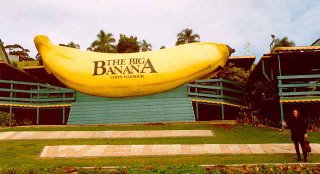 And when we could’ve climbed Uluru, we stopped in at the replica of Ayers Rock on the Pacific Highway and filled up with gas. It looked like a giant turd. Underwhelmed? I certainly was.

Pictures from Big Things - you can check out more of them on Richard Bakunowicz's website.

You can see more of Autralia's monstrosities on the following pages:

Loads of Big stuff - if you scroll back, you may even find the Big Ayers Rock. You'll recognise it by its turd like features e.g. it's big and brown.