I'm not going to get all maudlin on you.

Sure, there's things that I could've done differently, experiences that I might choose to leave in the past, but I can't change anything now. So there's no point angsting about it. Just get over it, move on, move forward into the future.

I don't regret spending money on a trip to Egypt rather than putting a deposit on a block of land. 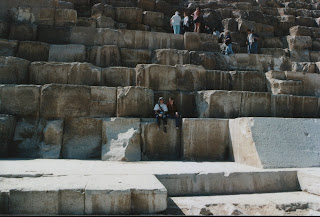 If I die not owning a piece of this earth, but with the sweet memories of standing in four thousand year old tombs and pyramids, and sailing down the Nile on a felucca, I die happy. 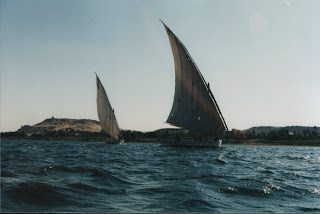 Too many people live in the past...regretting the dreams that they didn't live, the words they didn't speak, the people they didn't love. But they are so stuck in the past, they are not even present in the moment....and life is once again passing them by.

We all have a 'sliding doors' moment. A time where we wonder WHAT IF...I'd made the alternative decision. But we'll never really know the what if.... We can wonder, we can dream, but we still chose the path that we're now on, and turning back is not an option. And every decision you have ever made has led you to THIS place RIGHT NOW.
It's something I love about writing. I can explore the 'what's ifs'. I can 'choose-their-own-adventure' and if I don't like the outcome, I can rewrite it. Funny thing is, I rarely change the ending once it's in place. It's as if my sub-conscious knows the natural outcome of the story and once it is on paper, it only needs enhancing. Speaking of which, I need to go and do some enhancing of my current work in progress.

This was another entry in the Blogoff for Breast Cancer fundraiser. There's only a few of us left still blogging, and Courtney of Five Second Dance Party is the instigator of the fundraiser. Courtney wants to hold another blogoff in July, so if you're interested step on over to her blog, and let her know.
Posted by Diane at 9:47 PM

One of my favorite movies is "Sliding Doors" w/Gwyneth Paltrow. I agree that life is way too short to spend pining for a time that is no longer here. I think that life is meant to be soaked up like the sun!

I pondered all the things I don't regret too and really, nothing is as valuable as memories: land, a house, a car, nothing.

Egypt. What an amazing adventure. I would hope that you don't regret that! Writing is fantastic for getting to explore those different roads.

If I survive another week of the blog-off, I will blog about Egypt. You haven't 'camped' until you've camped in the desert on a camel safari with the Bedouin.

I think only things one should regret are those one never got the courage (or will) to try.
Even when I make a choice which doesn't turn out all that good, I think to myself: "Now at least you know that it doesn't work for you!"

BTW, are you by any chance interested in link exchange? You can check out my blog at http://photo-blogging.blogspot.com/ and drop me a comment if interested. Well, you can do it anyway. ;)