Blog-off Post Number 3 - We are blogging to raise money for the 3 Day Walk for Breast Cancer, with the blog-off initiated by Courtney of Five Second Dance Party. All the participants are in my special blog-roll on my sidebar and I have enjoyed reading their posts to date.Each week we have a one-word topic to blog about, and then we vote for each other's posts. The person with the least number of votes is eliminated from the competition and the blog-off continues. Last week, we said goodbye Yellow and Orange . This week?

Everyone is entitled to privacy. Including Nicole and Keith. Paris? Maybe not.
I don't know about you but my life isn't so vacuous and empty that I have to hang onto every image and rumour that the gossip magazines can churn out on a weekly basis. Why is celebrity such a commodity? Why do we need pictures of film star’s private vacations? Why do we need blurry out of range shots taken surreptitiously by wedding guests instead of the official released photographs? And who asked the glossy mags to pay stars exclusive rights for their honeymoon photos?
I’d hate to be a celebrity. Who made the price of fame forfeiting privacy? When you decide that you want to be a great actor, do you also decide that you want every minute that you step out in public photographed, reproduced in millions of magazines across the globe, dissected by a hungry public?
Even celebrities are entitled to privacy. They may be public figures, but this does not mean that we are entitled to own them, to stalk them every moment that they are in public.
In the golden years of Hollywood, the stars' public appearances were carefully stage managed and orchestrated by the studios to present the best public image. Today’s celebrities don’t know where the paparazzi may be lurking, or if Joe Citizen may decide to snap them with his hot new mobile phone camera and email the photos to a tabloid.
I no longer actively support the gossip magazine industry. Although I need magazines to create my collage poems, I buy them second-hand, compensating the poor sucker who paid full price for them. The stories are ludicrous and I’m not sure anyone with a shred of integrity can write the stories unless they are deluded to the truth. I’ve lost count of the number of times that Nicole has been pregnant (article complete with baby bump photos) since she married Keith, and the number of times have Angelina and Brad’s relationship has been on the rocks.
I’m pleased that my teenage dreams of being an actress did not come true. I’m happy that I can visit the supermarket without having to slap on the full dash of make-up for fear my face may be plastered over a magazine. I’m happy that I can live my life without feeling that I’m living inside a goldfish bowl. I’m happy that I have my privacy.
On my Chickollage blog, I have set myself a challenge of creating a collage poem every day for a year. So today's collage poem is an illustration of the above article. 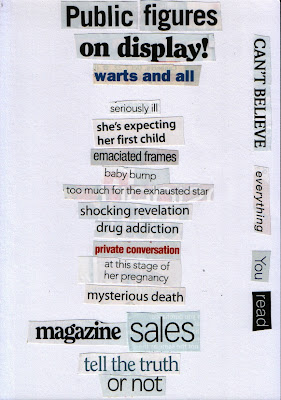 Funny, I touched on celebrities and their privacy also in my post this week. I have never been one for such magazines as Star and US Weekly. I love movies and I love TV and I love music. But I have never felt the need to become so wrapped up in the lives of these people. It is so sad for them that it has to be this way.

That was a very good post, indeed. I confess to being sucked into the celebrity gossip game every once in awhile, but I'm more known for my complete ignorance of all people famous. Name an actor and if he's not an A-lister, I probably can't remember who he is.

On the same token there, people go into those careers fully aware of what they're getting in for. I'm not saying they don't have the right to privacy- but they have to know anymore that it's going to be hard to find if you choose that career and lifestyle.

The collage poem is a nice touch. Great post.

I never knew that Chickollage was you! I left you a few comments a few months ago. I really dig that stuff!

I found it impossible to discuss privacy without touching on celebrity. I can't even imagine what it must be like. Part of the job taken to the absolute extreme. And yet, some of them deal with it very well.

Oops, looks like my secret identity has been revealed! Haha.

Courtney- while I think that stars must know what they're getting into, I think the way technology has advanced, it's just way out of control. Ten years ago, the women's magazines had proper articles and interviews with the stars and then a few pages of snippets of gossip at the back, plus lots of human interest stories. Now they seem to be 90% celebrity gossip. I hate the fact that the paparazzi camp outside people's homes waiting for them to come out. That's an invasion of privacy! Nicole Kidman ended up taking out a restraining order against one guy in Australia - he was supposed to have planted a bug outside her house.

My Cinderella story poked a lot of fun at the paparazzi - it was all about the pressure of being a modern princess having to produce the royal heir with the world's eyes (through the media) watching.

Great post. I sort of wonder how many of them do outrageous things because they are addicted to the "dirt", so to speak.

I have been watching that show on fX...Dirt, with Courtney Cox. Really interesting take on the whole gossip mag deal. Good show too. I tried so hard not to like it. Oops, my "dirt"y secret is out. I watch Dirt.

And such an apt collage.

I stopped buying magazines in early 1997. And I didnt stop there - I actually wrote to the editors of each and every mag and explained why I was no longer buying their mags.

Some editors actually phoned me to discuss my decisions! One mag sent me a free 12 month subscription - insisting they had "changed". I sent the entire 12 months worth of mags back to the a year later at their expense - showing that they hadnt!

It was a simple little photo and caption that set me off on my rant back then. It showed Reese Witherspoon carrying groceries to her car. Behind her was a man carrying more groceries. The caption insinuated she was playing around on her husband. Blind Freddy could see the guy behind her was a grocery store employee (he was wearing their uniform and had a name tag for gods sake!). Yes its true we dont get our groceries carried to the car in Aus but its common in the US.

I wasnt particularly a Reese fan or anything - it was simply the sheer stupidity of the magazine that pissed me off.

I must be so out of touch because when I read what you wrote about Nicole (with no last name) I thought of Anna Nicole. Aw. RIP.

Okay. Great stuff! I too don't understand the fascination with celebs.

And your collage? Loving it!