Beyond Happily Ever After appears in Wet Ink magazine OUT NOW!

A couple of months ago my short story, Beyond Happily Ever After, was accepted for publication by Wet Ink magazine, and now its on the shelves. This is my first sale!

If you have come to my blog looking for a summary of Cinderella, this is not the place to be. However, if you want to know what happened to Cinderella after she married her Prince 'Charming' and you are an adult, then read on:

Here is an excerpt:

Beyond Happily Ever After
And they all lived happily ever after.

That’s what Prince Edward had promised on their wedding night, but Cinderella found that the reality of life in the palace was far removed from any fairytale.
Twelve months after the dream wedding, Cindy showed no signs of producing the expected heir to the throne. Each evening a dozen chefs would concoct a feast containing all manner of aphrodisiacs, but Cindy often felt nauseous and bloated by the rich food. After dessert, the Prince would grunt and grind away, shouting commands to his sperm as if leading his troops into battle. Cindy opened her legs, laid back and thought of the kingdom she now served. Occasionally she wondered if her husband’s sperm had gone AWOL.
Each month as her stomach retained water and she menstruated, the newspaper hounds and gossip magazines published pictures of her ‘baby bump’, and expectation flew around the countryside like clucky hens. Cindy cried as she confessed to her husband that she was still without child. 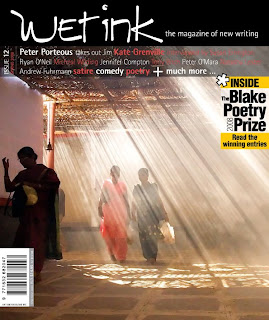 To read more, go to the Wet Ink website and purchase the magazine...

I had so much fun with Cinderella and her friends, that I expanded the short story into a novel...so stay tuned.

Labels: Beyond Happily Ever after, Cinderella, Diane Curran, Wet Ink

What great news... yes I bet you're excited. Keep on smiling.

A huge congratulations !!!! Next stop - the world!

Ooh wow! that's great news! Congratulations and who knows! we might see it on the big screen one day! 8)