Day 2 and we were relieved to wake up to blue sky and sunshine. 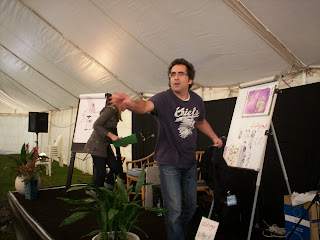 I began the day by dropping into the Kids Tent and watched Danny Katz and Mitch Vane in action. Danny read from their new book 'The Little Lunch Games' while Mitch illustrated the story on butcher paper. Kids in the audience were then invited to draw their own characters. 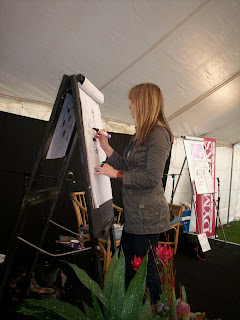 Next I noticed the line-up for a fix, as the caffeine addicts stood patiently waiting to get their morning hit. (I'm a reformed caffeine addict although my poison was Coca-Cola) 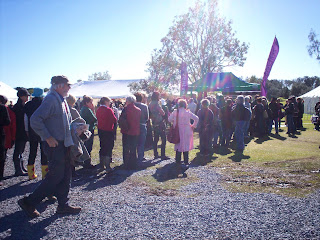 I attended a session called First Writes: the Path to Publication. In this session Annette Hughes said 'the hardest thing about memoir is there's no end, you're not dead yet' which is how I felt when I was writing the pizza delivery girl tales - trying to work out where it should end! (these publicaion sessions always get me in because I'm still on that first path).

Afterwards I talked to Lollie Barr, who wrote the young adult novel The Mag Hags. and whose by-line I see every week in the paper. 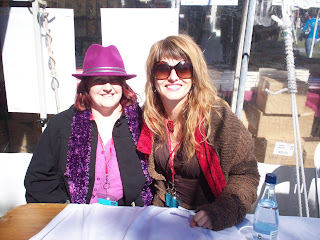 And I couldn't resist asking Aussie Idol Damien Leith for a photo opportunity as I'm a sucker for an Irish accent. 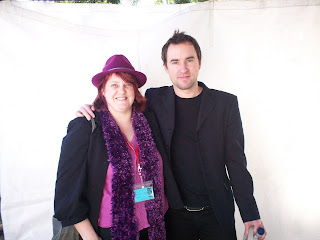 Morris Gleitzman always draws a crowd and the queue in the background of this photo are his young fans eager for an autograph. Perhaps you don't have to be an Aussie Idol after all? 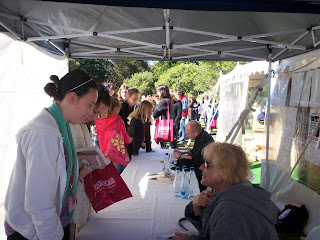 Next session I attended was 'Talking the Talk: Getting the dialogue right' with Max Barry, Virginia Duigan, Michael Gow and Judy Nunn. Max said 'You are writing a story that is taking place in the mind of the readers' summing up that we need to give our readers space to bring their own experiences to the story.

I bought Max's book Company following the session and told him I was nominated him for Foxy Author of the Week on my friend Natalie's blog. So - of course, had to get a photo with Foxy Max! 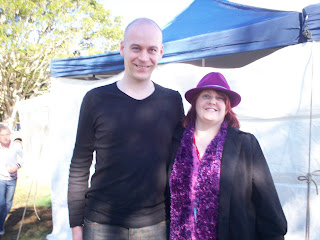 Next, I dropped by the kids tents again to see the talented and very young William Kostakis exercising excellent crowd control on the youngsters. 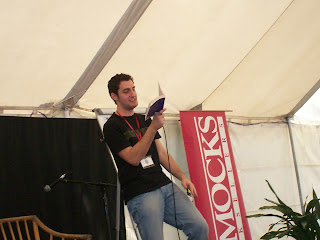 It seems that William has been writing about the same character (Courtney) since 6th grade. That's a long long obsession. You can read the results in his young adult novel Loathing Lola. 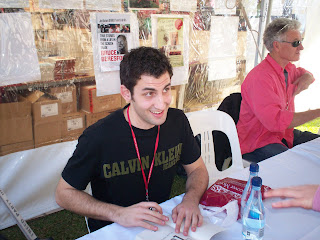 The next session was We'll Always Have Paris: celebrity versus literary publishing with the heads of Penguin Australia, Pan MacMillan along with the editor of Wet Ink magazine. I introduced myself to Phillip Edmunds as my story Beyond Happily Ever After will be published in Wet Ink next month.

Back at the cabin after a long and full day, we debated a mystery. How did our cabin key end up on our doormat? Well, it seems that the bush turkey was the culprit. 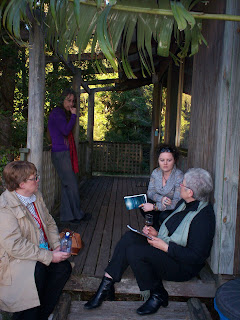 Saturday night dinner options were difficult and after much searching we ended up with two tables at opposite ends of the balcony at Hogs Breath Cafe. After a group near one vacated, we managed to make it one large table and ended up having an interesting conversation about men. But mostly we were exhausted...ready to retire and prepare for another exciting day at the Byron Bay Writers Festival.

Hey, it's William Kostakis. In my infinite narcissism, I Googled myself and your blog came up. It was a good read :)

Me doing the same thing.
I'm glad I said something useful.

You can go to my (new - the other one broke) blog at
http://annettehughes.blogspot.com/ and I'll post my who needs an agent article for you. It might help, although you seem to have a handle on schmoozing by the looks of the photos!

All the best of luck with your writing.

PS: A lot of us at Jspace just got creamed by a drive melt down, but keep in mind John Birmingham's Cheesburger Gothic and visit occasionally, he often has invaluable information about writing because he runs a fan fiction site where his devoted fans write their own stories and post them.