Rachel left a challenge on her blog to talk about our 'call to writing'. The following piece I composed a year ago as a homework exercise for my writers' group.

Once upon a time I wanted to be a writer. I dreamed about it. I envisioned it. I talked about it. And occasionally I wrote.
I was consumed by the relentless pace of the city. I was out almost every night of the week, at the theatre, the cinema or opening nights at work. I was gathering writing material, experiencing life, and dumping the events and memories into a filing cabinet into my mind, unsorted and unexamined. Rarely writing anything down.
My journal entries were sporadic and did not live up to my intentions. Looking back, I regret not keeping a log of the theatre productions I attended. The files in my filing cabinet have become damaged and incomplete and sometimes I can’t find the key to unlock the memories.
I made many excuses not to write. I was too busy. There were not enough hours in the day. My hand could not keep up with my thoughts. But they were all just excuses. I could choose to write anyway.
Ten years ago I made the decision to learn to be a writer. I moved to Adelaide and enrolled in a Professional Writing Course. I knew that I could no longer be distracted by the constant stimulation of Sydney.

It was a start. I learned about style and structure, editing, character, outlining, writing short stories and novels. But the course was the highligh of my week and my daily life was falling apart as I took on the mind-numbing ask of preparing loan documents for scanning at the Westpac Mortgage Centre. I applied for jobs in the theatre and arts industry and was constantly disheartened by the parochial and condescending attitude of the reigning arts administrators.
So it was time to sell up and move back to a friendlier town before I tied myself to the Glenelg tram line.
My father had moved to Kempsey and said we should join him. We looked at the map before bundling our possessions and drugged-out cat into the car, and decided we would end up either in Port Macquarie or Coffs Harbour.
And then I was offered a job in Nambucca so I moved. The job fell through. I wondered what the hell I was doing in this town with no job and no prospects. Until I joined the Nambucca Valley Writers Group. 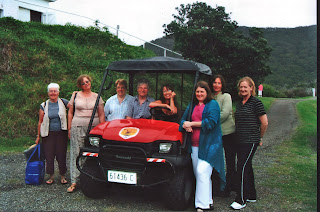 A few months later I started work in Coffs Harbour but by the time I moved north, I had bonded with the writers of the Nambucca Valley. By tackling new writing exercises, I learned that I didn’t need a writing course to learn how to write. I just needed to do it.
Here I am, three complete first drafts, one nearly complete first draft, and one started novel later. Since joining the group, I’ve written more than 340,000 words and created more than thirty collage poems. I’ve learned that ideas will always come if you just take the time to write. I’ve learned that writing every day keeps the muse happy and your writing world just below the surface ready to access with a stroke of a pen or the tapping of the keyboard. I’ve learned that there is no better high than a creative high – when the words are perfect and the characters are alive and you are inhabiting a world of your own creation.

Postscript: since writing this piece I have joined RWA and attended the conference in 2008. While I don't strictly write romance, all my stories have a girl and a guy and usually a happy ending. But the theme of all my novel-length pieces so far is 'finding yourself through some form of creativity'. Which is exactly how I'm living my life.

Cumulative word count is more than 400,000 words (see sidebar for breakdown) and the well of creativity is never dry.

In the last 12 months, Nambucca Valley Writers Group has expanded exponentially. Last Saturday, we added another 4 members to our group. We now have members in Coffs Harbour, Taree, South West Rocks, Melbourne and even one member who spends six months of each year in Vanuatu. Yes, we have become international. And this year, we celebrate our 20 year anniversary.
Posted by Diane at 8:59 AM

Thanks for sharing your call-to-writing story. It's wonderful you've found a sense of place with your writing group!

Keep writing and thank you also for your encouraging words on my blog!

Diane what a great story, you have come a long way in a short period of time.

Thanks for sharing your writing journey with us.
hugs
Sandie

Thanks for taking up the challenge and what a feel good story! I love how you describe your stories, especially the theme of them - I think finding your true self through creativity is something most people can relate to when they delve deep enough.

What a great story! Well done... look forward to meeting you at the conference!

This is fun! Everyone has a different tale to tell.
We're getting quite the little group together for this Nano in June thing.
'See' ya!

real good. writing is my addiction..

That was really inspiring :)