It is so good to be feeling human again. The flu hung around for about ten days but it only took a meeting with my writers group to start feeling energised again and then two days later I was back at work.

Mind you, it was hard to get back into that mindshift of getting up in the morning and going to work, instead of sleeping half the day. That's the trouble with being an owl instead of a lark. Mornings are torture.
So now I've rejoined the human race, I have lots to do. Besides catching up with sleep while I was sick, I also watched a few movies: Music and Lyrics (never say no to a Hugh Grant movie), Stranger than Fiction (especially interesting from a writer's point of view). I haven't brought myself to watch Volver yet - the fact that I'd have to read the movie and that it's over 3 hours along is a bit offputting at this point. Maybe Sunday. Plus I read Undead and Unpopular, Oh my Goth, Seven Steps on the Writers Journey, Pen on Fire, and I'm now halfway through Blind Submission.
Last year when I created Chickollage as a term for my chick lit collage poetry, I also started the Chickollage blog, talked a bit about it here and there, opened the Cafepress shop, and then about a month later looked up chickollage.com to find that someone had bought the domain about a week after I started the blog. I guess they were waiting for me to make millions and then sell the domain back to me for squillions. Well, I haven't made millions and their registration has expired so I'm now the proud owner of the domain, trying to work out what I'm going to put on it. Yet another thing on the to do list, but I'm imagining it will soon feature my favourite collage poems, a daily poem (yes, got to get back into the daily habit), and links to the big wide collage poetry world. 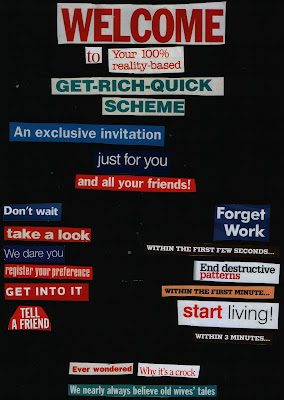 And yes there is writing to do. I'm anxiously waiting for feedback from the Chick Lit writers competition for Diary of the Future, to see if I'm on the right track or not. And I need to rewrite the synopsis. I'm going to break it down to the three act structure then use the turning points to construct the skeleton of the synopsis as Jenny Cruisie suggested at the Romance Writers Conference. Then I want to rewrite the beginning two more times (with different starting points) and events to see which one works best. I need to get this one polished up and out the door by the end of October so I can dive into another round of Nanowrimo in Novmber.

A big congratulations on finally getting your domain !!!! Karina xx