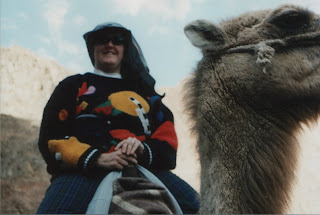 I really don't like camping. I'm just not into the whole pitch-a-tent-thing, sleep on a bit of foam or inflated mattress and commune with the mosquitos. I'm even less enamoured of the communal toilet/shower block or (shudder) the toilet tent or find a tree to hide behind.

I'm a comfort kind of girl. I don't have to have five star luxury, but just the basic necessities to make me feel comfortable - a hot shower, a warm bed, and a toilet that flushes properly.

So it was probably a shock to everyone when I opted to do a three week 'rough tour' of Egypt. I didn't want to see the country from a gilded hotel room and sail down the Nile on a cruiser. No, I wanted to experience the real Egypt so I booked the tour that included camel safaris, camping in the desert, and climbing Mt Sinai. Yes, it was rough and it was dirty, but it would be a big adventure. 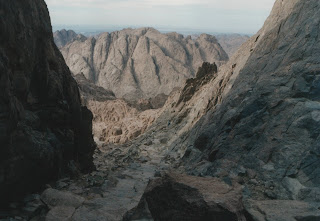 We climbed Mount Sinai at sunset, armed with some duty free liquor with the intention of sleeping the night on the mount. Only twenty minutes into the trek I realised that my fitness regime (or lack of) had not prepared me for the climb, so I bought a camel to carry me most of the way. However, my friendly camel had a distubing habit of walking very close to the edge of the trail and it was a long way down - it really didn't do too much for my fear of heights. 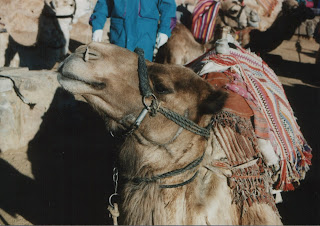 Finally we reached the end of the track and the beginning of the steep steps to the summit. Already wobbly from the inner thigh workout that the camel had provided me, I huffed and puffed up the steps thinking I was on a giant stepper machine. What an aerobics workout! I was glad that I had elected to sleep on the mountain for the night because there was no way I could've stumbled back down in the dark. 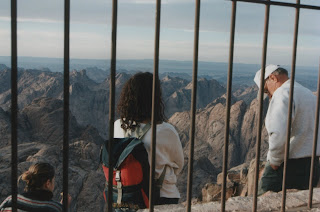 The night on Mount Sinai was amazing. Bloody freezing, but amazing. Once the sun went down and the sky turned black, we were surrounded by the light of a million stars. So far out of reach of any city lights, the sight was majestic. A little shop sits at the top of the mountain and the enterprising Bedouin stay up there a month at a time, selling tea and hiring out mattresses. (sidenote: the price of bottled water increases as you get further up at the mountain at the little kiosks on the side of the trail - wonder if that is called inflation or ascendation?) Oh, I waited. I asked. But there were no more commandments that night. 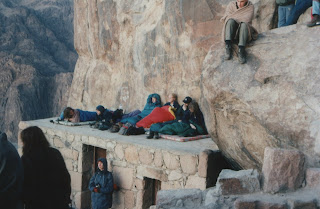 There was no chance of sleeping in on Mt Sinai. The next horde of tourists started arriving, chattering, alive at an ungodly hour of four o'clock the next morning. Soon we were surrounded by numerous languages and nationalities. But with a glorious sunrise illuminating the world. 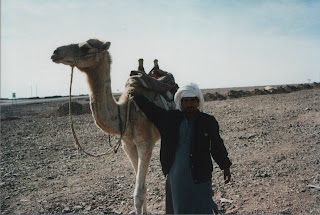 Our next camping adventure was the Camel Safari into the desert with the Bedouin, my second camel ride in two days. We met the group of Bedouin men in a makeshift camel 'carpark' and I can't remember whether we selected our camels or if the camels selected us. I don't think I'd ever get used to a camel getting up off the ground with me on its back. Our mattresses were slung over the camels' backs and we journeyed deep into the rocky desert. 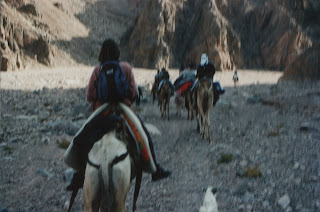 When we arrived, we slung out our mattresses on the ground and the Bedouin entertained us with camel races. That evening, they cooked us food, danced with us, and sang 'That's the Way, aha, aha, I like it, aha, aha.' yes it was KC and the Bedouin band. 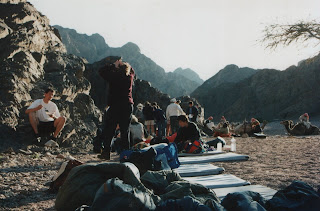 I started to think of my Egypt experience as the Sunrise -Sunset tour as I was awake for every sunrise (very unusual for me) and every sunset. 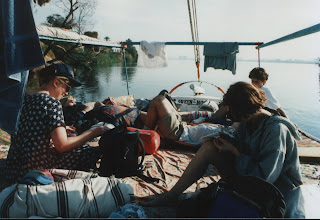 Then we went on our 3 day felucca cruise on the Nile. The boat's captain was also our chef. And our mattresses on the deck were also our day beds, and our dining room. But I tell you, despite the search for somewhere appropriate to ablute when we stopped at shore, I have never been more relaxed in my life. Bliss! 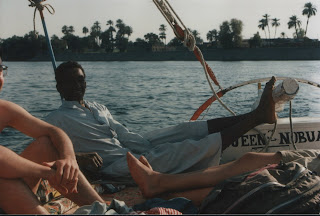 Of course, I didn't mind sleeping out in the open but when I had a choice of pitching a tent or upgrading to a hotel room for 10 egyptian pounds, I always opted for the four walls and the bed.

So, if you ask me if I want to go camping in the Aussie bush, you're very likely to get a resounding 'No thanks' - but if you were to say, let's go and camp out in Egypt, I'd be there again any day. I'll even put up with the 'long drops' just to experience that amazing country again.

This blogoff post is brought to you by the word 'camping'. We are blogging to raise funds for Courtney's 3 Day Walk for Breast Cancer. To make a donation to a great cause, please click on the banner.

Wow, Diane. What an amazing adventure. I think you just made me want to go to Egypt. Not that I wouldn't have gone before, but now I actively would like to travel there. That sounds like the most incredible experience. I'm too sheltered for my own good!

Yiiiiiiiiiiiii...this: "my friendly camel had a distubing habit of walking very close to the edge of the trail and it was a long way down" gave me a tingle. Yiii.

Sounds lovely. I will stick with the pictures. Oooooo, ahhhh! :D

Nice to hear, that you liked camping in the desert.
I hope I'll make it to Morocco next year. It will be my first time visit to a desert. Can't hardly wait.

WOW, those pics are magnificent. I would love to travel to Egypt.