A quiet celebration last night. Dinner at the local pub. Listening to a local singer. And then home in time to watch the fireworks on Sydney Harbour on television.
No New Year resolutions. They will only be broken and forgotten.
Seriously, I think the last time I wrote down resolutions on New Years Day was 1984. And the final one was 'to expand my horizons, form new friendships, renew old and precious friendships and have a completely fulfilling, rewarding and successful year in everything I do...'

Ah! The idealism of youth.
The dreams of a 16 year old.
And I must add, that for the previous resolutions written in that diary, I've added 'HA!' in red pen following each of them.
I'm thinking about writing a Things to Do before I'm 40 list. Up the ante on the 'Things to do before I die' because the clock is ticking.
Can you believe it's 2007? No. Neither can I. It seems like only yesterday I was running around in a millenium bug costume, New Year's Eve 1999. Sorry, I don't think I have any photos of the bug moment.
But apparently it's now 2007. The clock is ticking.
So, a few time specific goals for 2007.
By January 16, I will have done a simple edit on Diary of the Future, designed a cover and uploaded to lulu.com to take advantage of the free printed copy.
By January 27, I will have written an essay for my writers' group's annual competition. (I don't really want to hand that trophy back). 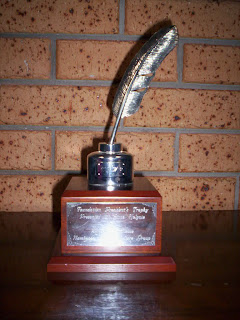 By February 28th, I will have completed editing Making the Cut, and sent out a cover letter, synopsis and three chapters to an Australian publisher.
That's enough for now! I can't think beyond the first two months of the year. I need to leave some room in the calendar for new creations, revision and submission and the ongoing updating of the Chickollage shop.

Speaking of Chickollage, we have added the Baby Boutique, which features cute collage designs by Jennifer Gordon on bibs, bodysuits and kid's t-shirts.

And the clock is ticking on the Ransom Notes Collage Poetry 2007 Diary ebay auctions. Less than 24 hours to go: black and green.
Here is a leaf from the diary, an attitude for the New Year, my collage poem, New Beginning. 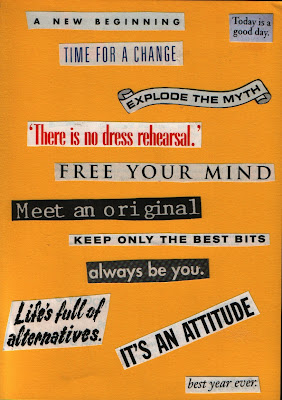 Happy New Year to you too! :D