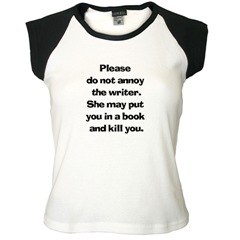 This t-shirt sums up how I've been feeling over the past couple of weeks. Be warned! Characters will die! But none of my favourites - sometimes I wish I could just go and hang out with them.


So, a question for the writers who read the blog: Have you done it? Killed someone off in a novel as method of making yourself feel better in real life? Aah! Revenge - it's even sweeter when there's no chance of going to jail.

When I was 15, I wrote a play about a mad scientist. I didn't know how to end it, so I just killed everyone off, including the mad scientist. Several years later, I rewrote it as an adult play. The second time, I must've had more compassion, as the android and the documentary maker were both still alive at the end. (Well, as alive as an android can be.)

But I must be crazy. I signed up for a First Draft workshop and haven't written anything. (Real life took over). But I have another week to go of the workshop(and I'm on holidays) so the aim is to finish the first draft of 'I'm with the Band'. I plan to do Nanowrimo again, and have no idea what I will be writing about. Maybe I'll come up with something by November. Or maybe I won't - and I'll just wing it. I'm still editing Making the Cut. I will be sending the Collage Diary to the printer this week. And I've been uploading more and more designs to the Chickollage shop. Have I bitten off more than I can chew? Well you know what they say about busy people? And I know if I tried to stay home and be a full-time writer, nothing would get written. The only way to do it is to put the pressure on myself through external motivation, cheer squads, publicly announced goals. It's the only way for me to produce the goods.
Posted by Diane at 8:34 PM

I must get myself one of those T-shirts :).

Nope... never yet killed anyone out of spite or revenge. Characters regularly die in my stories, but it's usually sad.

I'm thinking about doing NaNoWriMo this year, although I'd have to be crazy since I'm already writing one novel (http://taerith-romany.blogspot.com).

I think everyone who does Nano has to be crazy to some extent. Most people won't give that sort of dedication to their passion. But it's just the kind of momentum that spurs me on. And what an achievement when I get there.

Back when I was a ghost writer on a popular young adult mystery series starring two detective brothers, I would name characters and places after family and friends so that they would know I was the real writer of the books. I had lots of fun making people do and say things - sometimes as they are in real life, and other times way out of their real characters. It was always in good fun, though, and I never killed off anybody just out of spite. Though I did turn one or two into villains...

Publicly announce your goals is a great idea. It will help you remind yourself abt your goals.

I agree with getting nothing done while staying at home! I get more things done when I am busy.

Nah, haven't killed off anyone out of revenge. But I am willing to give it a try. :-)

In Making the Cut, I have a rooster and some hens. They started with a dare on the Nanowrimo forum to include the phrase 'flaming poultry'. I was really pissed off so I turned the people who had been making my life a living hell into chooks. And I was going to kill them. Really I was. Run them over accidently or something so that damn rooster could never crow again. But it didn't happen. The rooster is still crowing in the story. But I think it was satisfying enough just to turn them into chooks.