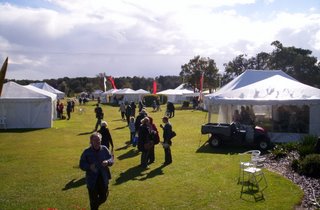 The buzz is always fantastic, the writers are inspiring, and just the fact that I'm spending four days straight with my writing buddies is so stimulating.

The only thing I didn't enjoy this year was the weather. Friday was glorious but Saturday and Sunday, the wind roared and the rain poured. My Chickollage t-shirts were hidden under layers of clothing, desperately trying to stay warm, and not on display as planned. Oh well, spring and summer are still to come and I have some great new t-shirts to wear. 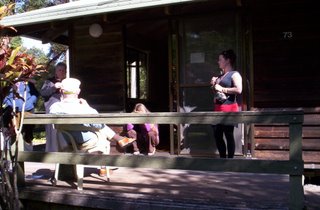 Each year, we share a cabin at the Byron Bay resort. In previous years, we've had eight gals in a two storey cabin with only one bathroom between us. With 9 gals going to the festival this year, we decided to have two cabins, which would've been fine, except it was completely open plan. One big room with beds, bunks, lounge and kitchen all in together and then a separate bathroom/closet with the toilet and shower in a tiny little alcove. So it was a good thing that we all like each other. But a bit harsh on the larks who wanted to sleep from 9pm while the owls were partying. Next year, if we have two cabins, we will separate the larks from the owls - it's just those pesky people in between who can't make up their mind whether they are larks or owls, will be the problem. 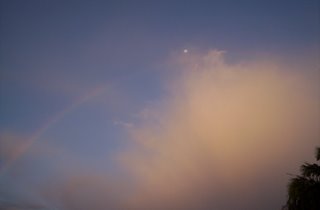 On Sunday afternoon, I captured this photo. I don't think I have ever seen the moon near a rainbow before. How cool!

Sunday afternoon, I spent in the bar with Roby, testing out the Vodka and Lime, while we wondered if there would be a party or not that evening. We then went to the last session, 10 years of the Byron Bay Writers Festival, where they honoured Jill Eddington for the amazing work she has done running the Festival. Then we saw them in the distance. At first we thought they were school kids in wild and zany feathered costumes with drums, jumping up and down, trying to keep warm. But the drums started beating, and the wobble boards wobbled, spinning their strange vibrations into the air, and they marched towards us, we realised it was a bunch of hyperactive adults, having a ball. And then the party really started...